I had made a large scale diorama of an epic Korean War battle. In late November 1950, hundreds of thousands of Chinese troops infiltrated North Korean as the Allied forces pushed north to end the war. The entrance of the Chinese took the Allies by surprise. The bitter cold weather in the mountains of North Korea was also an enemy to all sides. In this diorama, I used the awesome 1/6 scale 155mm Howitzer from Hasbro along with some of the Korean war troops. 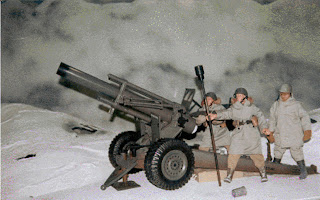