Many collectors have enjoyed the Gentle Giant Jumbo Kenner Star Wars line over the last 3-4 years. Those reproductions of our favorite 3-3/4" line at 12 inch scale have been a great trip down nostalgia lane.

I've been hoping GG would give the same treatment to Hasbro's GI Joe: A Real American Hero figures that were first released in 1982.  Last year, GG displayed them at NYCC and SDCC. The current lineup (all up for preorder) include Grunt, Rock-N-Roll, Stalker, Snake-Eyes and Zap.

At this time, Grunt was only a SDCC exclusive. Instead of a large repro card like the Kenner Star Wars figures, this figure came in a great 1960s GI Joe footlocker box.

When I finally opened this up, it totally took me back to getting that first GI Joe: ARAH figure. My first one was Short-Fuze, the mortar soldier. Anyway, this figure's looks is dead on the original,and so much to have at 1/6th scale. Can't wait for the rest. 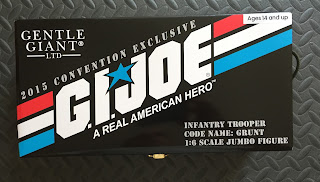 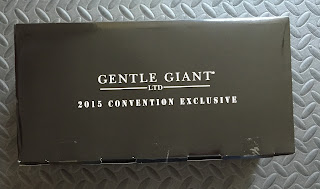 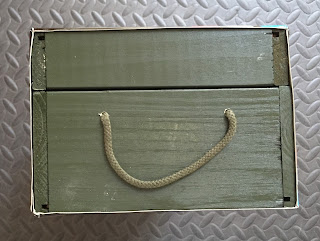 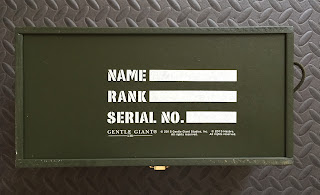 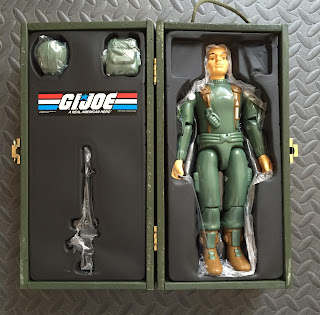 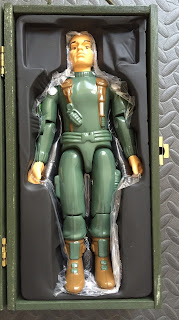 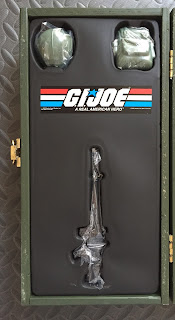 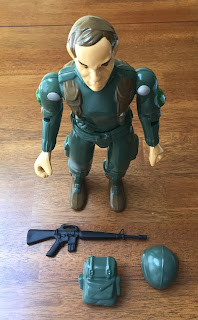 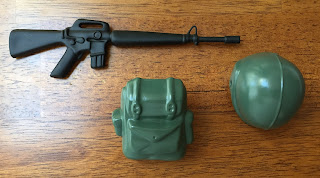 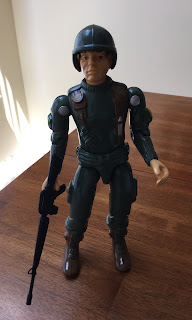 First of all, sorry I've been off the grid for awhile.

Well, San Diego Comic Con has come and gone. I was anxiously awaiting new reveals from multiple companies and well, there really wasn't anything new. One would think the SDCC would be as hot as New York Toy Fair in terms of getting people excited about new things. This year was not the case. In terms of my favorite toy lines, here is what I saw:

Gentle Giant Star Wars- no new Jumbo Kenner Star Wars figures except Jabba the Hutt. This line is either dead or on hiatus for awhile as GG looks at other properties to Jumbo-ize - like Super Powers, Secret Wars, and GI Joe.

GG did have a "Droids" (cartoon) R2D2 and Boba Fett exclusive for the con.

Star Wars - very little new stuff shown, likely to keep new The Force Awakens secretive closer to the launch of the line on September 4th. Fans were disappointed. Hoping for some reveals at Disney 23 expo  www.d23.com coming in mid-August.

Hasbro Star Wars 6 Inch Black Series - No new reveals except for the Force Awakens TIE Fighter pilot and a 6 inch scale TIE Fighter. OK - that was cool, but rumors around the price tag was $170. Might be a little too much. The Hasbro exclusive was a First Order Stormtrooper. Pretty cool. Will likely be an troop builder when the rest of the line rolls out.

McFarlane Walking Dead. No new figure reveals. TV Series 8 and Comic Series 4 were displayed. Fans already knew these were coming months ago. Rumors around series 9 include Beth, Sasha, Dale (torn apart), and T-Dog were going around. Hope it's true. Been wanting a T-Dog for awhile. I still need to watch the Panels for the Fear the Walking Dead and Walking Dead Season 6. The trailers were released for both. Very cool. Hoping Fear does well enough to garner some figures.

Marvel Legends - no new reveals. They have several series coming out this summer. Really good ones with great Build-A-Figures to include Ultron with the Ant-Man series, Rhino and Hulkbuster. In the past, Marvel Legends were so hard to find, now they are flooding the market and killing our wallets, but great figures overall.

NECA - Aliens. Nothing really new except a Red Queen Genocide Alien and some Alien: Isolation figures from the video games. They are cool. Are we ever going to get more Marines?

No new Game of Thrones from Funko.

No new ReAction figures from Funko. Everything announced at Toy Fair has hit the streets. Nothing left for 2015? I must say they have had a stellar lineup, releasing over 180 figures, 140+ unique in 18 months. Fans should be satisfied, though we never are.

So overall, no new surprises. Maybe that is a result of the internet era, but in years past there were always some new reveals. Not this year. It was just kind of 'Meh, except for the deliberate absence of Star Wars.

C'Mon Funko ReAction team - I know we are spoiled - but looking for a whole set of Aliens figures - to include APC, Queen, Power Loader, Hive, Dropship, etc.
Posted by GIJigsaw at 5:04 PM No comments: