I met one of my best friends in second grade when I brought a Greedo action figure to school. He asked "What's a Greedo?"

I showed him Greedo. We've been friends ever since. That was 33? years ago. So when Gentle Giant came out with their 12 inch retro Kenner replica,...Hell Yeah! I got a Greedo. 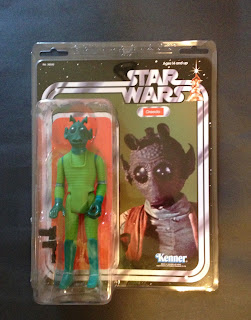 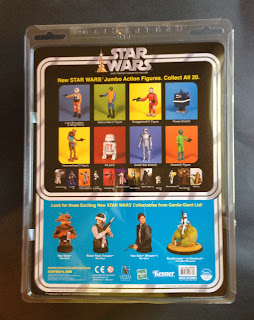 I have an update to this coming soon. Big surprise...stay tuned!
Posted by GIJigsaw at 7:11 PM No comments:

I have pre-ordered plenty of toys over the last few years, because, quite frankly, I never see them on the toy shelves. I can't remember the last time I purchased a McFarlane NFL football figure at a store. They are usually picked through, or arrive months after release.

However, I still go to Toys R Us and Target at least once a week, just to look around, see what might be out there. And every once in awhile, you find something completely unexpected. Even with everything on the web these days months in advance, you can still get surprised. That happened this weekend. And because of that, I am going to try and start a new segment on GI Jigsaw to go out and find the unexpected.

In this case, I had already been collecting S.L.U.G. Zombies. SLUG stands for Scary Little Ugly Guys. They are 2 inch, hard rubber/plastic zombie figures with silly names like Grave Lincoln, instead of Abe Lincoln. Find out more at www.slugzombies.com. Made by JAKKS Pacific, they are reminiscent of MUSCLE Men, the wrestling figures of the 80s. The zombies are green. The zombie hunters are tan.

So far, 4 series of SLUG Zombies have been released. I accidentally stumbled on Series 4 at Target a few weeks ago. Series 4 has not made it to online retailers, like Entertainment Earth or CMD Store yet, so finding that was a great surprise. This weekend, as I was perusing Target, I noticed something odd that hadn't been shown on any website....a zombie that looked like Santa Claus, and a snowman. I quickly picked through the packs hanging from the pegs. CHristmas themed SLUG Zombies!!! Where did those come from? Retailing at $3.99 a pack, I grabbed two complete sets. There were four packs of Holiday SLUG Zombies. Altogether, there are 8 individual Christmas zombie figures. The tan Zombie hunter in each pack is a re-release of a figure already made.


Back of the pack, showing the checklist of all the figures. 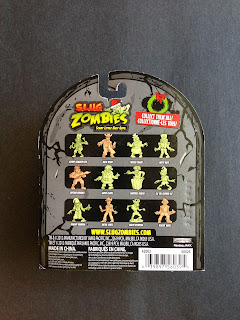 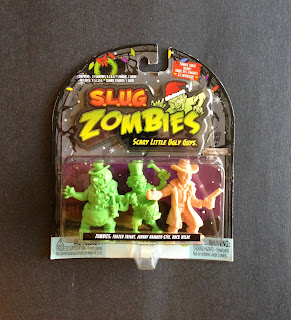 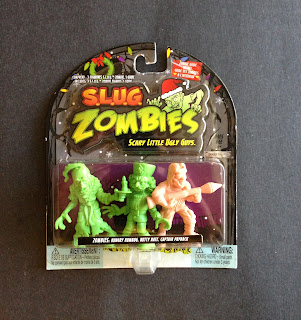 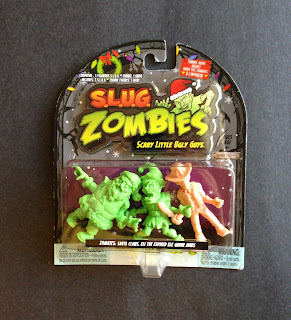 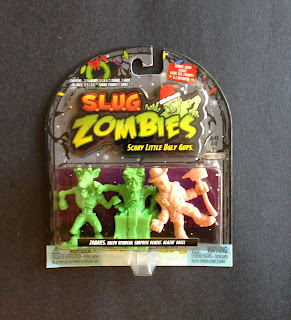 These were fun to find. Once again, totally unexpected. I will catch you all up on the first four series of SLUG Zombies soon.

With that, I am curious to see what I can find in the next weekend or two.

Happy Hunting...good luck on Black Friday and Cyber Monday.
Posted by GIJigsaw at 4:52 AM No comments: