Barzso "Last of the Mohicans" Playset

Happy 2013! It's good to be back. What is my New Year's resolution? Do a post every Sunday and Wednesday. That should be easier to keep than losing weight or drinking less. Just kidding...it isn't work if we do something we love. Anyway, Sunday and Wednesday posts, weekly, are my resolutions.

First off for 2013...a great playset from Barzso (www.barzso.com) from the late 90s? "Last of the Mohicans" starring Daniel Day-Lewis and  Madeline Stowe is one of the most amazing movies I have seen. This is one of the few examples where the movie is better than the book. I tried reading the book after the movie....snooze.

Anyway, sometime, early in Barzso's history they gained the rights to do a licensed playset about the film. Mind you, there hasn't been a licensed plastic miniature playset in several decades. The first time I bought this set (yes, the first time - sold it to make money, and then missed it) I paid a good chunk for it. The second time, much less, but this time I am not selling it again.

The Huron village portion is pretty cool...longhouse and many accessories. In the movie, this comes at the end as Hawkeye barters for the release of Cora. 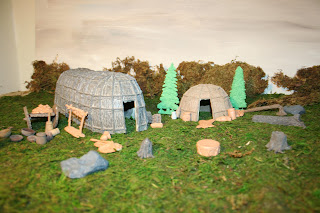 The British regulars and Hurons come in handy to recreate the scene where the British leave Ft. William Henry and are ambushed by the Hurons. 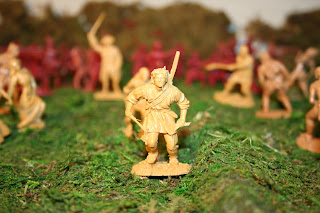 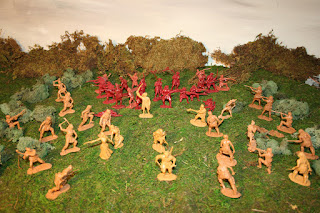 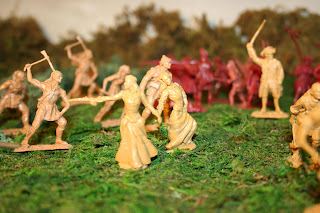 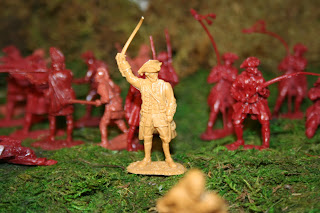 The best part of the playset is the rock ledge where Hawkeye, Uncas, and Chingachgook stand up to Magua as he is taking Alice as his bride. No spoilers here. You have to see the movie. 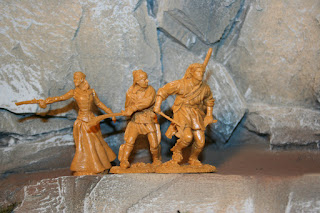 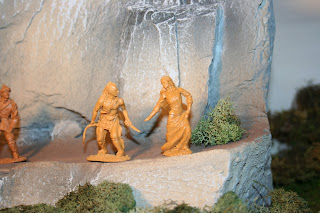 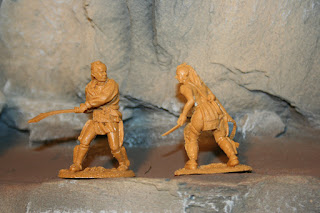 Posted by GIJigsaw at 6:16 PM No comments: