Most collectors would gasp if they saw this....all six Hot Toys Aliens figures removed from their packaging. These were the most detailed and amazing Aliens figures ever released. At 12 inches, the detail put into them are outstanding, down to the graffiti on their armor.

Hot Toys released the first three (Hicks, Vasquez, Apone) in 2006, shortly followed by the second set (Drake, Hudson, Ripley). Originally retailing for about $80-90, the sold out figures now go on the secondary market for $250-600. Hicks and Apone command the highest prices.

Hot Toys later released a 1/6th scale Power Loader, including Ripley figure. Would have been nice to see a few more of the Marines released (Dietrich, Frost, Gorman) and maybe even Burke.

The alien eggs are from the Hot Toys Snap Kits line. Each case of snap kits came with 12 eggs. Inside the egg was a 1/18 scale Alien or Marine action figure you could snap together. Quite fragile, it would have been awesome to see an enter line of 3 3/4 inch figures from Aliens along with vehicles and playsets. 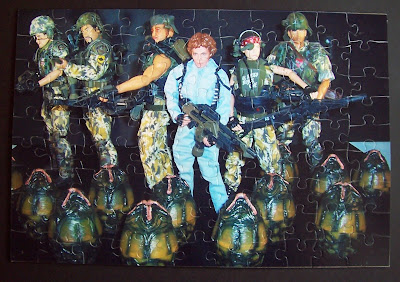 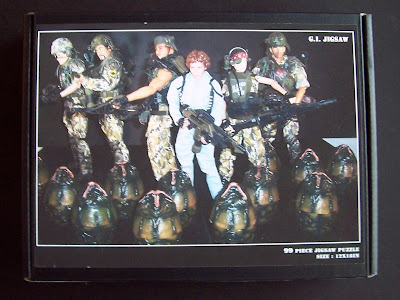 Posted by GIJigsaw at 4:15 AM No comments:

This diorama and puzzle build is one I looked forward to for a long time. The Cobra Paravipers released 2007-2008 were pretty slick. A lot of detail and accessories for a small 3 -3/4 inch figure. Helmets with breathing tubes and visors, gear strapped all the way around, knives tied around the boot and two weapons, including a rifle with removable clip.

Just needed something for them to jump out of. Enter the Processed Plastic AC130 cargo plane. This is the rare black edition I blogged about earlier. The olive green version was fairly common in the 1970s. I had never seen the black one with the side cannons until this year when I finally figured out who manufactured the green one I had seen as a kid in the local grocery store. Check out my earlier February 2011 post about the Processed Plastic planes.

The plane had the original bright red stickers still on them. Since I didn't want to ruin this vintage piece, I "painted" over the stickers with Microsoft paint. The fact that the plane was in the background in a dark environment allows the "paint job" to be near invisible. 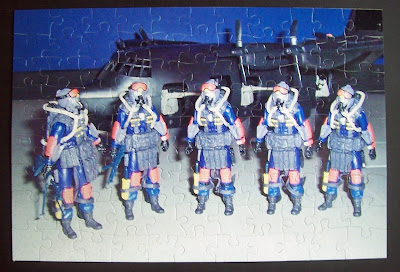 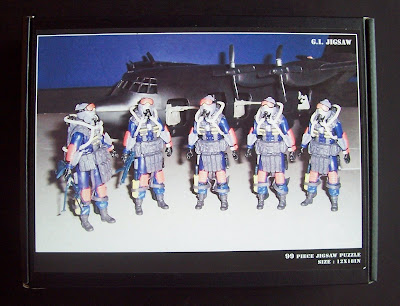 Posted by GIJigsaw at 4:07 AM No comments:

I was never a big fan of the Imperial TIE Fighters. In 30+ years of collecting, I don't think I ever actually purchased a TIE Fighter (standard, Darth, interceptor). But the TIE Bomber is awesome! Don't know why I like it so much. But here are four of them, docked in their hangar on some Star Destroyer.

You'll see two versions, the white ones on top and the grey ones on the lower deck. This puzzle was deceptively challenging because of the angles of the wings. It was a fun one to put together. 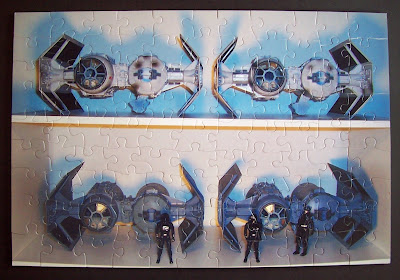 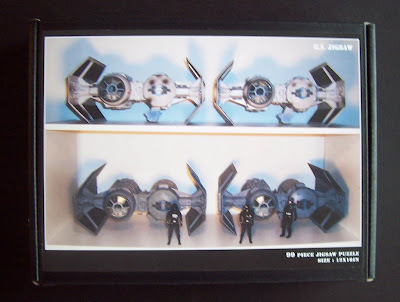 Posted by GIJigsaw at 4:04 AM No comments:

Spartans! What is Your Profession?

Their profession is soldiering. The Spartan figures by NECA stop the enemy Immortals from breaching the Hot Gates. This is one of the original dioramas I did, just a different set up of the combatants.

Only one series of figures were produced. Though it seemed to sell well in retail, the line never went beyond that. At one point there were reports of a Xerxes figure coming out. It would have been nice to see at least a second series with some other Spartan warriors, King Xerxes and some of his interesting minions. 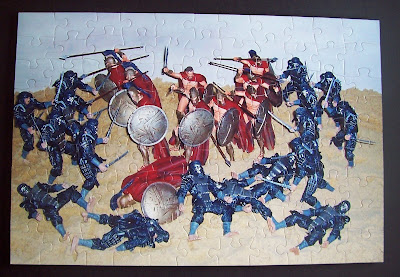 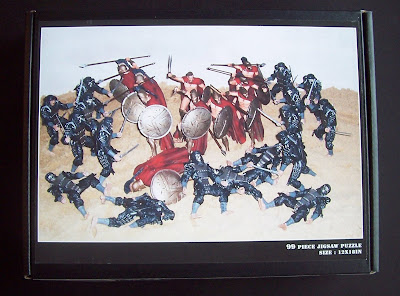 Posted by GIJigsaw at 3:58 AM No comments:

"Upon the fields of friendly strife are sown the seeds, that on other days, on other fields, will bear the fruits of victory." Douglas MacArthur

General MacArthur spoke these words implying that on the sporting fields, young men and women may use those same talents on the battlefield.

The Army-Navy football game is as intense as it gets. Typically not playing for a bowl game or national championship, the players on each side battle their hearts out. Rivals on the field, teammates in battle off it. These days, most know they will see combat soon after graduation.

In this puzzle, I used the Hasbro Army and Navy football players, along with the vintage style Cadet and Midshipment that were originally released in the late 1960s. Flanked on the side are a Navy SEAL from BBI and a WWII Ranger Captain from Cotswold Collectibles. 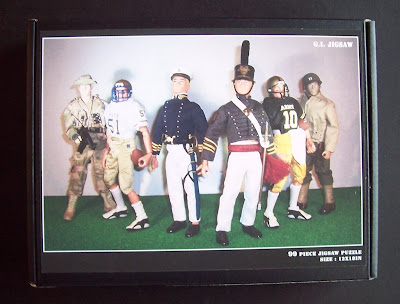 Posted by GIJigsaw at 3:49 AM No comments: