F is for Toy Fair

No. The A to Z Blogging challenge hasn't restarted. And no, the F isn't technically for Fair. F is for the grade I gave Toy Fair this past year. I know it's been 3 months since Toy Fair in New York but it's been bugging me for that long.  I don't usually complain on the toy forums - there is so much negativity there; after all, they are just toys, but something seems to be amiss.

For years, I have been anxious and excited about the new stuff being displayed at Toy Fair each February in New York City. I even had a chance to attend one year, courtesy of a friend and neighbor who works in the toy industry.

Each year I have been pleasantly surprised by new items, and later frustrated by items shown that never came to fruition. That is business though, and I get it.

I don't know what's going on in the toy industry today, but Toy Fair was a complete bomb this year....in my opinion...which like they say, everyone has one.

So what bugged me.

1. No new Star Wars. OK - I get it. Disney is cramming in a movie a year and Rogue One is coming in December, with it's toy release in September. I understand why they wouldn't show anything for Rogue One (the trailer is awesome by the way), but there is NOTHING new coming for Force Awakens between now and September. The only new action figure announced was the Maz Takodana Encounter figure set.  Three of the four figures are re-releases. 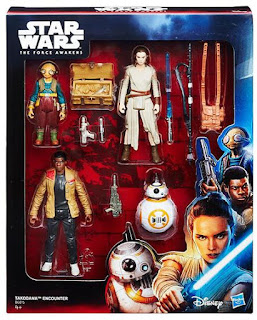 Hasbro and Disney - my wallet is burning to buy new action figures, and you give me nothing. Hope your Q2 and Q3 numbers suck.


2. ReAction retro 3-3/4" figures. Funko and Super7 have released some great figures in this line. And I get that success of the line generates future series, and things haven't gone as well as hoped. There is a dedicated fanbase but it hasn't captured the hearts and minds of others so sales haven't been great. They did show off the great Aliens - Ripley, Power Loader, Alien Queen 3-pack but that was it. An awesome set but nothing else.

About a month ago, this was released by the Funko/Super7 ReAction team.

So there is hope, but it would have been nice to seen some prototypes at Toy Fair. Just another reason it got an F grade.  Definitely looking forward to ET, Dark Crystal and The Godfather. Prototypes of the Dark Crystal have been shown on social media. Pretty darn cool.

3. McFarlane Walking Dead - If there was a grade lower than F, I would have given it. For years, McFarlane has done a fantastic job producing the 5 inch line of zombies and heroes from the acclaimed television show and comic. We have quite the cast of characters. For that I can't complain. Thank you thank you thank you Todd McFarlane and company.

However, at Toy Fair this year, they announced the end of the 5 inch line and a start of the 7 inch statue line. Collectors were....pissed. There is already a 10 inch statue line. The 7 inch line won't just be Walking Dead. The Color Tops line will be a mix of properties. The response from McFarlane was "we felt" that collector's would like this format better. Another quote was "you'll grow to love these." 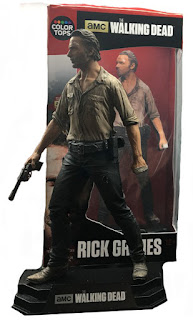 The problem with "we felt" is that it indicates no market research was actually done. There may have been but by all indications it wasn't, especially with the fan outrage. This was one where McFarlane Toys were on their own agenda and basically told fans and collectors to take a hike.

One would hope that are wallets will vote that this was a bad decision, but since it is Walking Dead, pretty sure they will be purchased anyway.

The other problem with the Color Tops line is they showed a Gears of War figure on Day 1. It was announced to be 7 inches so I thought McFarlane would pick up where NECA left off. NECA's Gears of War is one my top 3 figure lines of all time. I was wrong. The one figure shown was the one figure that was produced, part of the mix of the Color Tops line.

Marvel Legends showed off some cool stuff. They always do. Now it's just a matter of figuring out what gets released and what doesn't. And of course, 3-4 series will all get released within two months of each other, killing our wallets with efficient ruthlessness.

So I feel better, getting that off my chest.

Back to our regularly scheduled programming, now that I've also recovered from the A to Z Blogging challenge.

Posted by GIJigsaw at 4:59 AM No comments: