One of the best parts of the Indiana Jones movies and a great opening for the original Raiders of the Lost Ark. After Indy retrieves the idol, he is chased by the Hovitos natives through the South American jungle. I used the 2 inch Hasbro Indiana Jones Adventure Heroes figures. The Heroes figures from Hasbro for Marvel, GI Joe, Indiana Jones and Star Wars were great. Too bad they ended...though there seem to be some Marvel 3 figure sets coming out for the Avengers and Spider Man. 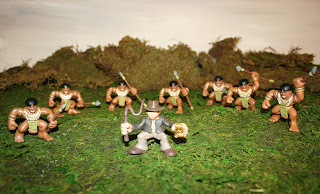