So there I was…the Mojave desert…California…1999. I was a combat engineer officer in the US Army and I had just been transferred from Camp Castle, Korea to be an instructor at the National Training Center at Ft. Irwin. I had commanded Alpha Company of the 2nd Engineers in Korea for the past 15 months.

I had several ongoing hobbies at this point. First, the 12 inch GI Joes were coming back in force. It was nice to be back in the states where I could grab the latest Joes at Toys R Us, Walmart, and Target.  I was also a big fan of military art, especially James Dietz and Don Stivers.

I was a member of the 2nd Engineer Association and I started looking for an artist to commission a painting for my old unit. I contacted Mr. Dietz and Mr. Stivers. The cost was significant. It would take a heroic fund raising effort. So I shelved the project. This had happened several times in the past with others who tried commissioning a painting for their military units.

Flash forward a few years later, I am living in Virginia and looking at an online military print store. A new artist has several prints displayed. The artist was Larry Selman. His work looked…familiar. I did some online searches and found his website. In previous years, he had painted the art for many of the GI Joe packages.

I connected with Larry, who only lived an hour away from me. We determined a fair price, I got the fund raising done now that we secured an artist, and got the painting and prints done.

“Burning of the Colors” is a painting about the 2nd Engineers during the Korean War. Assigned to be the rear guard of 2nd Infantry Division’s withdrawal when China entered the war, the engineers fought as infantry, held off a significant Chinese force before they were annihilated. The 1000 soldier battalion reassembled with less than 300 a few days later. Over 300 were captured and held as POWs for three years. Less than 100 survived interment at the POW camps. Before being captured, the battalion commander ordered the battalion flag to be burned so it wouldn't be captured as a war trophy. The battle streamers that hang at the top of the flag pole included battle streamers from the Civil War, WWI, and WWII. 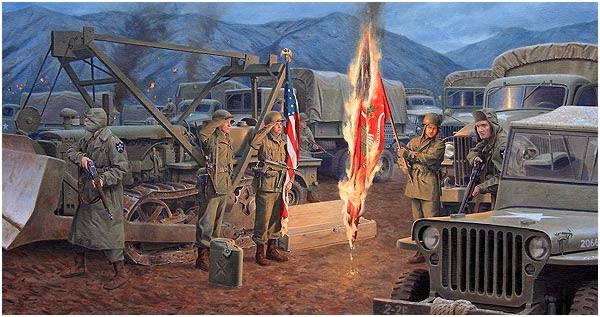 Burning of the Colors

Larry is a true gentleman, a great artist, and outstanding business partner. I always look forward to checking out what he is working on next. Works in Progress can be found at Larry’s blog: http://selmanart.com/

I thought it was especially cool that a lot of his portfolio was part of my Joe collections. After working with Larry, my appreciation for packaging art increased greatly.

Other Leaguers tell their cool story!

The Primordial Badger Takes a Trip in the Snow
Posted by GIJigsaw at 11:38 AM